Hampton Roads’ natural assets have made it one of the busiest ports on the East Coast.

The region is home to the world’s largest naval base and is a summertime destination for hundreds of thousands of visitors.

For up-to-date traffic and travel information for the bridges and tunnels of Hampton Roads, call 511, tune to 1680 AM or visit 511virginia.org to see traffic cameras throughout the region.

This four-lane, dual-tunnel system connects the Virginia Peninsula cities of Newport News and Hampton to the South Hampton Roads cities of Suffolk and Chesapeake. The MMMBT typically has about half of the traffic volume of the Hampton Roads Bridge-Tunnel each day and is considered a practical, less-congested alternative.

To travel from Interstate 64 to South Hampton Roads using the MMMBT, take the I-664 South exit (264) and continue to the Interstate 64/264 interchange. The tunnel does not charge a toll.

It connects Hampton and Newport News to Norfolk and Virginia Beach.

Nearly three million vehicles use it each month. It carries more than 100,000 vehicles a day during the tourist season.

During heavy traffic, many motorists use the MMMBT on I-664 instead.

The HRBT does not charge a toll.

The Downtown Tunnel on I-264 is the oldest of two tunnels that cross the Elizabeth River.

The Downtown Tunnel links Norfolk and Portsmouth. The first of two two-lane tunnels opened in 1952 and the second in 1987.

Along with the Berkley Bridge, which connects I-264 and I-464 on the Norfolk side of the tunnel, the Downtown Tunnel carries more than three million vehicles a month. The tunnel is operated by Elizabeth River Crossings.

Toll rates vary based on travel times and payment method -- either E-ZPass or a Pay by Plate system.

More than a million vehicles per month use the Midtown Tunnel.

This bi-directional tunnel carried traffic in each direction of =Route 58 between the cities.

In 2016, the Midtown Tunnel doubled its capacity by adding another two-lane tunnel.

Operated by Elizabeth River Crossings, toll rates vary based on travel times and payment method, using either E-ZPass or a Pay by Plate system.

Toll rates vary based on travel times and payment method -- either E-ZPass or a Pay by Plate system.

The Chesapeake Bay Bridge-Tunnel spans the mouth of the bay, connecting Virginia Beach to Cape Charles in Northampton County on the Eastern Shore.

This is a time-saving shortcut for motorists traveling from Delaware, Maryland, Pennsylvania and New York.

The bridge-tunnel is owned, operated, and maintained by The Chesapeake Bay Bridge and Tunnel Commission, not VDOT.

The maximum height is 13 feet, 6 inches.

Hampton Roads' drawbridges open for water traffic according to federal regulations issued by the Coast Guard.

The George P. Coleman Bridge is a double-swing span that connects Gloucester Point and Yorktown. 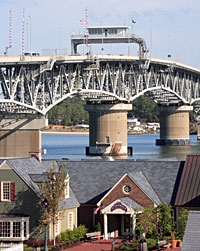 In 1995, the bridge was reconstructed with four lanes to handle increased traffic.

The Coleman Bridge opens upon vessel demand, according to federal regulations. The bridge remains closed from 5 - 8 a.m. and 3 - 7 p.m., Monday through Friday, except federal holidays. It does open for vessels in an emergency.

The 4.5-mile James River Bridge, Virginia’s longest state-maintained bridge, opened in 1928 as the first connector between the Peninsula and South Hampton Roads. 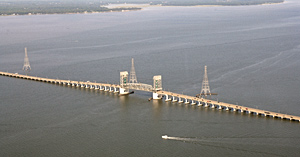 The bridge carries Routes 17/258/32 between Newport News and Isle of Wight County.

The original two-lane bridge was replaced in 1982 with a wider four-lane lift span bridge designed to handle increased traffic volumes.

With nearly one million vehicles using the JRB each month, this crossing offers a smart travel alternative when the Hampton Roads Bridge-Tunnel and Monitor-Merrimac Bridge-Tunnel are congested.

To travel from I-64 to South Hampton Roads over the James River Bridge, take the Mercury Boulevard, Route 258 ramp (exit 263). Continue on Route 17 to the I-664 interchange in Suffolk. The bridge is free.

The James River Bridge opens upon vessel demand, according to federal regulations. It does not have any periods where openings are restricted.

The Berkley Bridge opened in 1952 and is part of the I-264 Downtown Tunnel complex, connecting Portsmouth and Norfolk.

The bridge was rebuilt in 1991 to handle increased traffic. The bridge merges I-464 traffic traveling from Chesapeake with I-264 traffic in Norfolk.

Each of the four leafs on the dual drawbridge weighs 640 tons.

The I-264 Berkley Bridge will open for maritime vessel signal at 9 a.m., 11 a.m., 1 p.m., and 2:30 p.m., Monday through Friday. The bridge will not open during these scheduled times when vessels have not signaled and are not waiting for passage. The duration of the traffic stops due to the bridge lifts are dependent on maritime traffic volumes. The bridge will remain in the close position during commute periods, from 5 - 9 a.m. and from 3 - 7 p.m., Monday through Friday, except during federal holidays.

The bridge can open upon request during the restricted hours for a vessel with a draft of at least 18 feet if at least six hours of notification has been given.

Built in 1972, the High Rise Bridge is a concrete and steel drawbridge located on I-64 in Chesapeake. The four-lane, twin bascule span bridge carries more than two million motorists a month. The facility is the only highway-grade toll-free crossing of the Southern Branch of the Elizabeth River and can be used as an alternative to the tolled Downtown and Midtown Tunnel.

The bridge opens upon vessel demand, according to federal regulations. It remains closed from 6 - 9 a.m. and 3 - 6 p.m., Monday through Friday, except federal holidays.

If a vessel needs it to be opened during peak hours, three days notice is required. It does open for vessels in an emergency. Bridge openings occur only about once a week.

Located on Military Highway (Route 13), the Gilmerton Bridge is a state-of-the-art vertical lift bridge spanning the Southern Branch of the Elizabeth River. The four-lane bridge is operated by the city of Chesapeake and carries an average monthly traffic volume of approximately one million vehicles. The facility is toll-free. 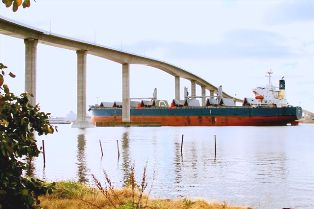 This private toll bridge opened in October 2012 and spans the Southern Branch of the Elizabeth River.

With quick connections to I-464 and I-264, it’s an alternative route when neighboring bridges and tunnels are congested.

The fixed, high-rise bridge is one of the tallest in Virginia and not subject to openings for maritime traffic. It also has been designated an official Virginia truck route without height or weight restrictions.

Privately owned and operated, the Jordan Bridge features two undivided lanes plus a pedestrian sidewalk separated from traffic by a concrete barrier.

A fully-electronic video capture system accepts E-ZPass to maximize convenience for drivers, but an E-ZPass is not required for travel. There is no toll plaza and cash is not accepted.

Vehicles traveling without an E-ZPass will be mailed an invoice for their travel fees.

Additional fees of $1 per additional axle apply to multi-axle vehicles.

VDOT operates traffic management systems on most of the Hampton Roads crossings.

If You’re in an Accident

If you’re in an accident where there are no injuries or your vehicle breaks down, the law requires you to move your car to the road’s shoulder, out of the flow of traffic.

On a bridge or in a tunnel, stay with your vehicle and wait for help. An incident team will be dispatched quickly, as the tunnels and most bridges are monitored.

To call state police from your cell phone, dial # 77.

Before motor homes can go through tunnels, they must stop to have propane tanks checked.

Who do I contact about transporting hazardous materials through a state-owned tunnel?

What are the six tunnels that are state-owned?

There are restrictions on the width, height, length and weight of vehicles traveling in Virginia.

Call the Department of Motor Vehicles at 804-786-2787 for general information and to obtain a permit.