The demolition and construction will be done in two stages to maintain one lane of traffic in each direction on Denbigh Boulevard throughout construction.

In the first stage that started in April 2019, traffic was shifted to one lane in each direction on the bridge, as demolition and construction of the new bridge, roadway, retaining wall and stormwater pond were underway.

Once completed in June 2021, traffic will be shifted to the newly constructed side of the bridge, as the remaining demolition and construction of the new bridge, roadway and additional stormwater pond is underway.

This project will replace the structurally-deficient Denbigh Boulevard Bridge over Interstate 64 and CSX Railway between Warwick Boulevard and Jefferson Avenue in Newport News with a new bridge that meets current geometric and design standards.

The project includes the demolition of the existing bridge, and the construction of a new bridge with four 12-foot lanes, a 16-foot raised median, and two 8.5-foot sidewalks, as well as new roadway approaches and stormwater management facilities.

Motorists will be advised of lane closures and traffic shifts that occur during the project, which is scheduled for completion in spring 2022. All construction work is dependent upon weather conditions.

As of June 2021, crews have completed the first stage of the bridge replacement project consisting of the demolition and the reconstruction of the eastbound Denbigh Boulevard overpass bridge. In order to demolish and replace the existing westbound overpass bridge in the next stage of construction, both directions of traffic between Pocahontas Drive and Millwood Drive were shifted from the westbound section of the bridge over to the newly constructed eastbound bridge. 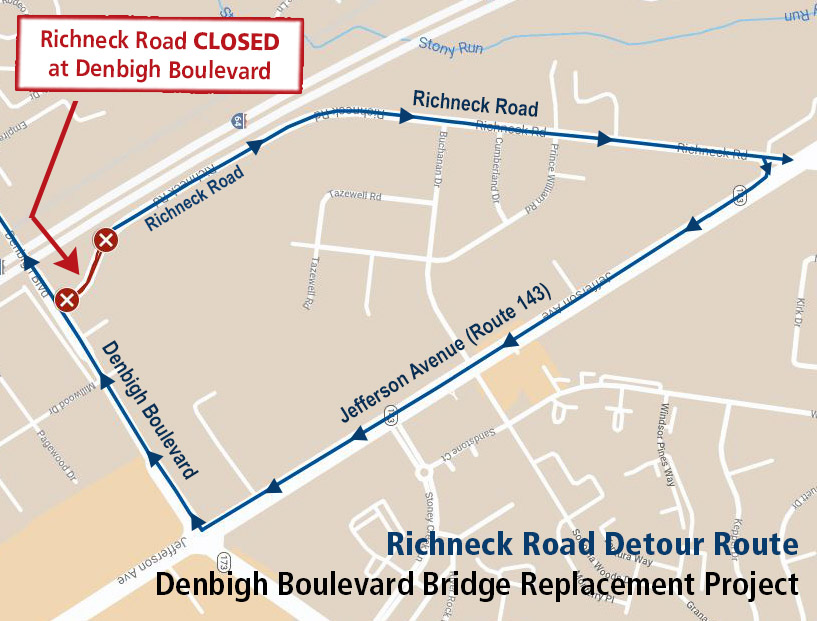 Starting as early as Oct. 20 and 27, overnight, full closures are scheduled to be in place between 7 p.m. and 6 a.m. on Denbigh Boulevard, between Pocahontas Drive and Millwood Drive, to allow for the pouring of the bridge deck for the new spans of the westbound section of the Denbigh Boulevard overpass over I-64. A signed detour will be in place directing motorists traveling along Warwick Boulevard and Jefferson Avenue to use Bland Boulevard as an alternate route.

*This construction work is weather- and schedule-dependent; therefore, this schedule is subject to change.

For more information on scheduled traffic impacts for this work, read the full traffic alerts here:

"FULL CLOSURES SCHEDULED OVERNIGHT ON DENBIGH BOULEVARD BRIDGE OVER I-64" 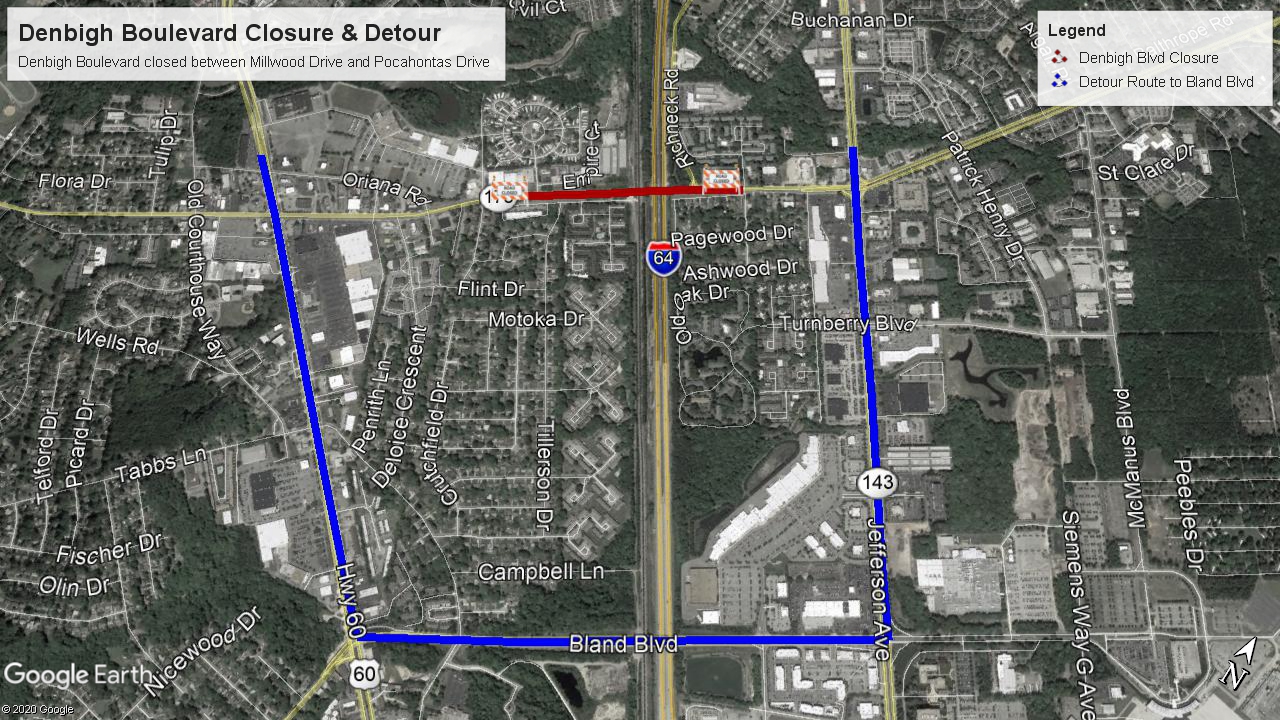 The project will upgrade the interstate overpass to meet current design standards.

The estimated* schedule for the project is as follows: