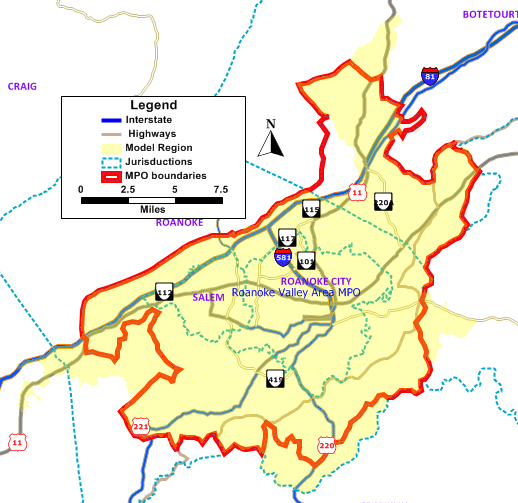 The model is bounded by the rural areas of Botetourt, Roanoke, and Franklin counties.

The Roanoke River bisects the region as it crosses through the city of Roanoke.

The Roanoke metropolitan area is the major focal point of activity in Southwest Virginia.

It is serviced by a major railroad, an interstate bus line, a number of large trucking firms and a municipal airport.

The Blue Ridge Parkway also provides tourists with a scenic route along the eastern and southern portion of the study area.

There are no HOV or toll facilities in the Roanoke Valley MPO.

The Greater Roanoke Transit Company provides commuter bus service for the city and surrounding counties, although this accounts for a small percentage of total commuters.

Another available mode is the Roanoke Area Dial-A-Ride.