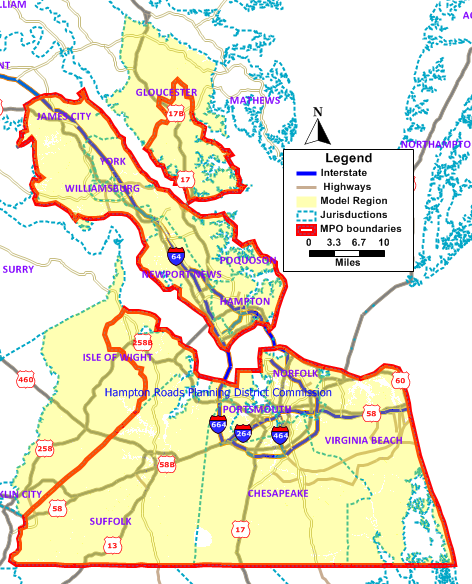 The Hampton Roads model area is near the Richmond/Tri-Cities model, with only a portion of Charles City and New Kent counties separating the two.

The model is bounded by the Atlantic Ocean on the east and North Carolina to the south. The Chesapeake Bay and James River separate the southern and northern areas.

Hampton Roads and its military establishment contain the largest concentration of military personnel and resources in the world. Each ach branch of the armed forces represented.

The area is home to the world's largest naval base.

Numerous major industries support this military complex, as well as shipbuilding, a major business in the region.

In addition, the Hampton Roads region is a popular tourist destination. Popular attractions include its beaches, the historic Colonial Williamsburg area, and other attractions such as Busch Gardens.

These features lead to major fluctuations in travel due to seasonal (tourist) effects, as well as shifts in the economy and military-related actions.

Travel between the northern (“Peninsula”) and southern (“Southside”) portions is limited to three main bridges and some ferry service.