Bicycling and Walking in Virginia 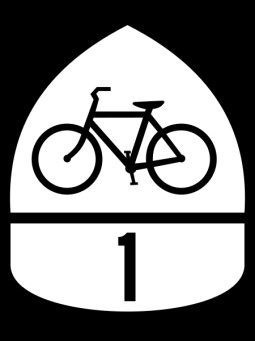 Bicycle Route 1 was established in 1982 as an original U.S. Bicycle Route. When completed, U.S. Bike Route 1 (USBR 1) will run approximately 1,525 miles from Florida to Maine. Along North Carolina, New Hampshire, and Maine, the portion of the route in Virginia is recognized by AASHTO.

The current alignment of as US Bike Route 1 in Virginia follows a similar path as the East Coast Greenway. It is approximately 274 miles long and traverses 21 Virginia localities, including 14 counties, three independent cities, and four incorporated towns.

Bicycle Route 76, a part of the TransAmerica Trail, runs from Missouri to Yorktown. Bikecentennial, a predecessor to U.S. Bike Route 76 (USBR 76), was a series of cross-country bicycle tours in commemoration of the bicentennial of America’s Declaration of Independence. Along with USBR 1, it is one of the two original U.S. Bicycle Routes established by AASHTO.

The current alignment of as US Bike Route 76 is approximately 533 miles long and crosses 38 Virginia localities, including 23 counties, four independent cities, and elven incorporated towns.