Stringfellow Road Closed at I-66 During Overnight Hours Tomorrow, June 12, and Next Week, June 14-15, for Overhead Bridge Work
Traffic stoppages planned for I-66 East and West near Stringfellow Road in Chantilly on Saturday night, June 12

UPDATE (6/15/2021): There will be a simultaneous, 10-minute stoppage of traffic on I-66 East and West approaching Stringfellow Road tonight, Tuesday, June 15, to move materials. State Police will help coordinate the stoppages.

FAIRFAX – Northbound and southbound Stringfellow Road approaching I-66 will close nightly Saturday, June 12, Monday, June 14, and Tuesday, June 15, to allow for continued installation of bridge beams for a new I-66 East bridge over Stringfellow Road as part of the Transform 66 Outside the Beltway Project. Drivers traveling on Stringfellow Road will be directed to a detour route and should allow extra time.

The Stringfellow Road ramps to I-66 East/from I-66 West will also be closed during this time.

Additionally, traffic stoppages are planned for I-66 East and West approaching Stringfellow Road during the overnight hours Saturday night, June 12, between midnight and 4 a.m., so that crews can move a bridge beam at Stringfellow Road. Traffic on I-66 will be stopped in both directions simultaneously for up to 10 minutes to accommodate this work. State Police will help coordinate the stoppages. 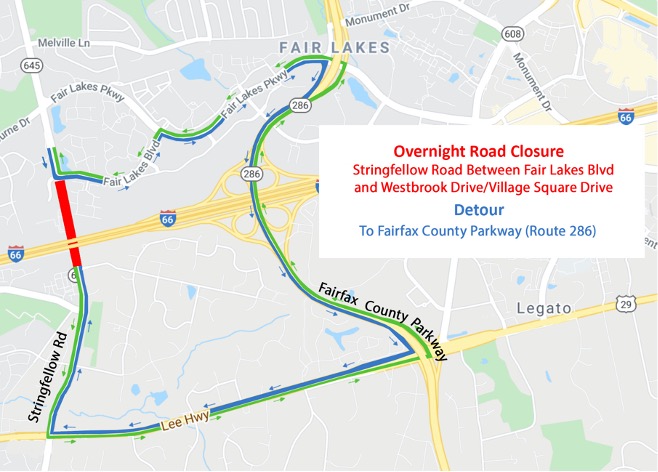 The I-66 bridges over Stringfellow Road are being widened to accommodate the new I-66 Express Lanes and provide room for any future mass transit along I-66.

Construction and lane closure updates are available at Transform66.org and on Twitter @VaDOTNOVA. To receive updates automatically by email, sign up here.