FAIRFAX – All lanes of I-66 West approaching Route 7 (Leesburg Pike) will close nightly October 12-14 for continued bridge beam installation at the I-66/I-495 Interchange. Traffic will be detoured using Route 7 and I-495. The ramp from I-495 North to I-66 West, as well as the 495 Express Lanes North, and multiple lanes of I-495 North approaching I-66 will also be closed so that this work may be implemented.

Drivers traveling on I-66 and I-495 during this time should expect delays and should consider using alternate routes.

Crews are installing beams for a new flyover ramp from I-495 North to I-66 West as part of the Transform 66 Outside the Beltway Project. 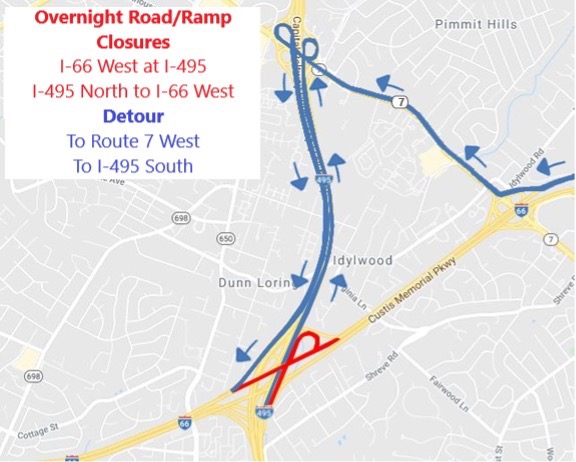 495 Express Lanes North from Robinson Terminal to I-66

The I-66/I-495 Interchange is being modified with several new ramps and connections as part of the Transform 66 Outside the Beltway Project. Improvements at the interchange include adding access to and from the existing 495 Express Lanes and the new I-66 Express Lanes, as well as building new connections between express and general purpose lanes.

Construction and lane closure updates are available at Transform66.org and on Twitter @VaDOTNOVA. To receive project updates automatically by email, sign up here.