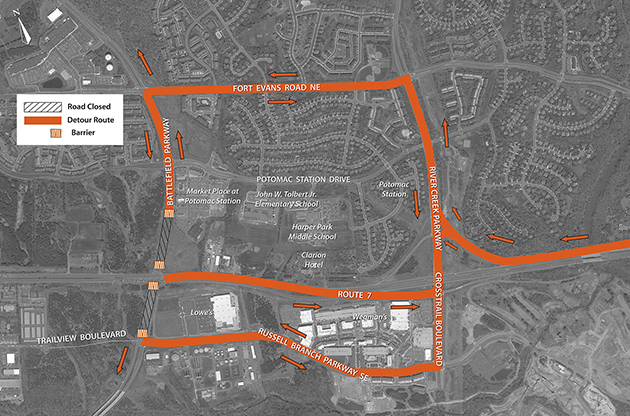 Update: The Battlefield Parkway closure at Route 7 and detour are expected to be in place as early as 6 p.m. Sunday, July 26. For Sunday night, drivers can expect overnight lane closures on Route 7 as early as 7 p.m. in each direction with intermittent 20-minute full closures after 11 p.m.

LEESBURG – Battlefield Parkway between Russell Branch Parkway and the Marketplace at Potomac Station shopping center entrance will be closed beginning Sunday night, July 26 for approximately ten months to allow crews to construct an overpass as part of the new interchange at Route 7 and Battlefield Parkway, according to the Virginia Department of Transportation.

Once the closure is in place, the traffic signal at the intersection will be removed from service. During the closure, Route 7 eastbound and westbound will remain open to traffic at all times.

Route 7 traffic headed to Battlefield Parkway will be detoured via the following routes:

Battlefield Parkway traffic will be detoured via the following routes:

Message boards displaying the closure date are in place as part of advance notification to travelers.

In addition to the new grade-separated interchange, other project improvements include:

The entire project is scheduled to be complete in fall 2021.

Visit virginiadot.org/route7battlefield throughout the project for updates.