Traffic Pattern Changes Planned for I-66/Route 29 Interchange in Centreville Starting on or About October 28
Ramp from Route 29 South to I-66 West will close; Drivers will use new temporary left-turn lanes, traffic signal to access highway

FAIRFAX – A new traffic pattern will be implemented on or about Monday, October 28, at the I-66/Route 29 Interchange in Centreville for approximately 18 months. Traffic changes will include closing the ramp from Route 29 South to I-66 West, and installing new, temporary left-turn lanes at the existing traffic signal to allow drivers access to I-66 West. Changes are needed to rebuild the I-66 bridges over Route 29 to allow for future mass transit expansion along I-66 and future widening of Route 29 under the interstate.

Drivers should expect construction-related detours and additional changes to traffic patterns as work progresses at the Route 29 interchange. Drivers are reminded to use caution and pay attention to lane markings and roadway signs in construction work zones. 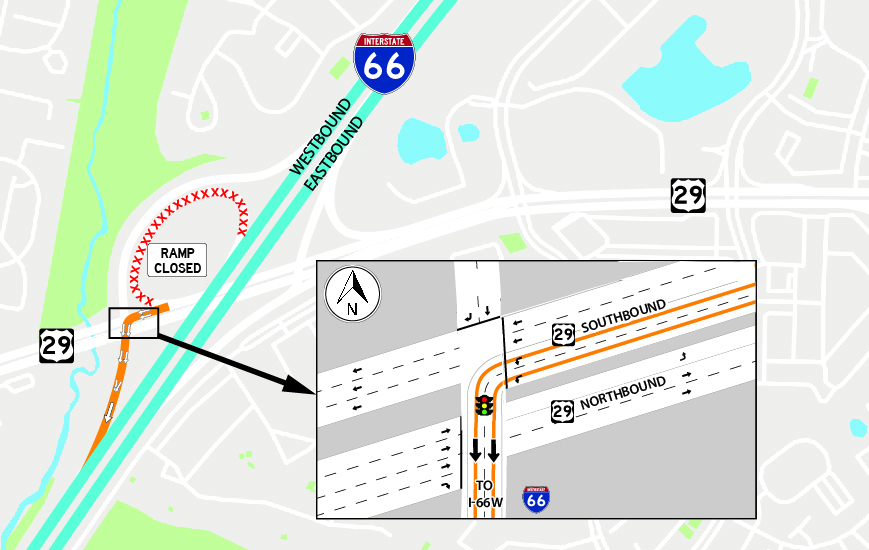 Traffic pattern changes at the I-66/Route 29 Interchange in Centreville beginning on or about October 28, 2019. Drivers traveling on Route 29 South will access I-66 West by turning left at the traffic signal and joining the ramp from Route 29 North to I-66 West