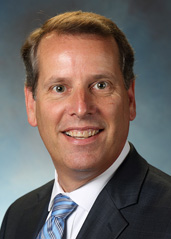 Robert H. Cary, P.E., L.S, who started his career with the Virginia Department of Transportation (VDOT) in 1992, was named chief deputy commissioner of the agency in January, 2018.

Cary was named VDOT’s Chief of Innovation in March of 2017. In this position he served as VDOT’s executive leader responsible for bringing innovation to every aspect of VDOT’s business.

Prior to taking on his current role within VDOT, he was the Richmond District engineer, where he was responsible for a $450 million annual budget in delivering the construction, maintenance and operations programs across nearly 19,000 lane miles of state roadways and almost 2,600 National Bridge Inventory (NBI) structures.

Cary has more than 29 years of experience in transportation design, project development and strategic leadership.

He is a registered professional engineer and licensed surveyor and has a bachelor’s degree in Civil Engineering from Virginia Tech. He began his career with the agency as a transportation engineer and rose through the roles of district Location and Design engineer, Preliminary Engineering manager and served as the district engineer in three of VDOT’s districts across Virginia.

Cary has served as a member of the American Association of State Highway Officials (AASHTO) Technical Committee on Project Management (chairman), AASHTO’s Subcommittee on Design, and AASHTO’s Council on Highways and Streets.

He received AASHTO’s Pathfinder Award, the AASHTO Subcommittee on Design’s Award, three VDOT Commissioner’s Awards for Excellence, as well as a Governor’s Award for his work with VDOT.

Cary holds a Bachelor of Science degree in civil engineering from Virginia Tech. He is a member of Chi Epsilon, the Civil Engineering Honor Society.

He is also a graduate of VDOT’s Executive Leadership Program and is a registered professional engineer and licensed surveyor in Virginia.

Born in Boston, Cary was raised in Northern Virginia where he began his professional career. He has served in five of VDOT's nine Districts.  He and his wife, Lena, enjoy travelling and spending time with their family.